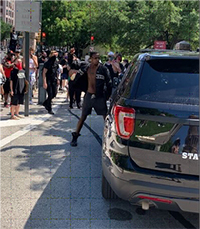 AUSTIN – The Texas Department of Public Safety (DPS) obtained an arrest warrant for the 14th person wanted in connection with the protests and rioting that occurred at the Texas State Capitol in May. During the riots, numerous officers were assaulted and property was damaged.

Paul Lester Allen Jr., 21, of Austin, was arrested on Aug. 8 on a fugitive warrant for misdemeanor riot in connection with the May 30 protests, during which Allen intentionally damaged a marked DPS patrol vehicle while participating in the riots on Capitol grounds. Allen was booked into the Travis County Jail.

This arrest, along with the several others made by DPS in recent weeks, have come as the result of an extensive investigation by DPS Special Agents who have worked to identify subjects involved in violent and destructive behavior during these protests.

That is how your intelligent message may land on a Texas...