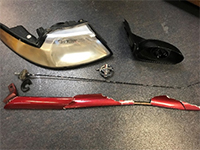 CORSICANA – The Texas Department of Public Safety (DPS) is asking for the public’s help in the investigation of a fatal hit-and-run crash that resulted in the death of a pedestrian on IH45 between Ferris and Palmer. The crash occurred on IH45 in Ellis County near Risinger/Newton Road, Monday, June 10, 2019 sometime between 8:54 p.m. and 10:42 p.m.

Preliminary investigation indicates a 1999 maroon Ford Mustang was traveling south on IH 45 when it struck Bret L. Rendleman, 30, of Dittmer Missouri. Mr. Rendleman was walking south on the improved shoulder before being struck.  He died at the scene of the crash.

Anyone, including automotive body shop owners/employees, that has information on the fatal crash or was in the area at the time, is encouraged to contact the Texas DPS office in Waxahachie at 972-923-6670.