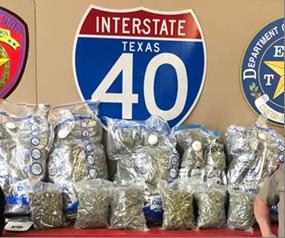 At approximately 11:24 a.m., a DPS Trooper stopped a 2007 Acura SUV traveling east on I-40 near
Conway for a traffic violation. A DPS canine arrived on scene and alerted on the vehicle.
The Trooper then discovered multiple vacuum-sealed bundles of marijuana inside the vehicle.

The driver – Jose Rosas, 47, of Santa Rosa, California – was arrested and charged with felony possession of marijuana.
Rosas was transported and booked into the Carson County Jail.

The drugs allegedly were being transported from Santa Rosa, California to Milton, New York.

Reward Supplied for Most Needed Fugitive from School Station

REMINDER: Reward Elevated to $15,000 for Most Needed Fugitive, Mexican Mafia...