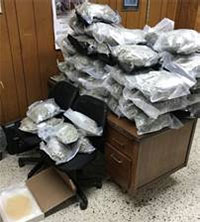 AMARILLO – The Texas Department of Public Safety (DPS) seized 106 pounds of marijuana, more than four pounds of THC wax and $7,002 in cash Tuesday, after a Texas Highway Patrol Trooper stopped a vehicle in Oldham County.

At approximately 12:49 p.m., a DPS Trooper stopped a 2018 Chevrolet Malibu traveling east on I-40 near Vega, for a traffic violation. A DPS Canine unit arrived on scene and alerted on the vehicle. The Trooper then discovered multiple vacuum-sealed packages of marijuana, THC wax in the vehicle, and $7,002 on the passenger.

The driver – Ishmael Mwesigwa, of Las Vegas, Nevada – and passenger – Frawn Earl, of Compton, California, were arrested and charged with felony possession of marijuana. Mwesigwa, 35, and Frawn, 40, were transported and booked into the Oldham County Jail.

The drugs allegedly were being transported from Las Vegas, Nevada to an unknown destination.