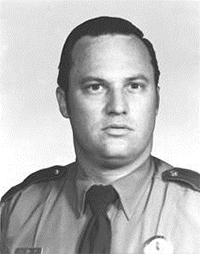 The Trooper Bill Davidson Highway, created by the 85th Texas Legislature, consists of a southbound section of U.S. 59 (mile marker 618 – 620) in Jackson County.

“Today’s memorial dedication reminds us once again of Trooper Davidson’s selfless service and sacrifice for the state of Texas, and we are proud to join his family and friends in honoring his legacy,” said DPS Director Steven McCraw. “DPS is extremely grateful to the 85th Texas Legislature for making this memorial highway designation a reality.”

“Trooper Davidson heroically put his life on the line to protect this community, and he will always be remembered for his unwavering commitment to the people of Texas,” said DPS Region 6 Director Phillip Ayala. “This memorial roadway will serve as constant reminder of his courageous and faithful service.”

Trooper Davidson, 43, died on April 14, 1992, from injuries sustained when he was shot after stopping a stolen vehicle. Davidson, who joined DPS in 1973, was stationed in Edna at the time of his death, and is survived by his wife and daughter. In 2012, a DPS patrol vessel was commissioned as the Bill Davidson in his honor.

DPS: Make Plans for CDL Testing In the present day

QAnon gaining a foothold in Texas